Following the before and after stories of CRU Cowork, The Haven and Coworker Hub, we invited Davide Dattoli, Co-Founder of one of Europe’s largest coworking brand Talent Garden (TAG) to talk to us about how TAG adapted to the pandemic both as a team and as a brand as well as what do they imagine the future of coworking to look like in the regions where they are located.TAG being originally from Italy, the first European country hit hard by COVID-19, but also being present all over Europe, it was very interesting to realize that each and every European country adapted differently to the pandemic, which had, as a result, a different impact on coworking spaces.

Below the key takeaways of his talk.

“The best way to predict the future is to invent it”

Davide started his presentation by introducing Talent Garden and how it all came to life back in 2011 with the original vision to provide a physical platform (through a space) that can empower people to do their work digitally. At first, coworking was not on the map. Realizing that Europe is full of tech talents (be it startups or freelancers) moving fast while larger corporations were lacking behind, struggling to transform themselves digitally and innovate. Thinking about the best way to tackle this and support the ecosystem, Davide and his co-founders realized that coworking was actually the best tool.

Going one step further, Talent Garden came to life as a campus combining under one roof not only a coworking space, but also an innovation school, corporate transformation and events. Today, TAG is vertical based, allowing only professionals from the tech industry to use their campuses. And if you think that TAG is only about startups, well that’s not the case. Throughout their 23 campuses, they gather freelancers, large corporations, media agencies, digital agencies and, of course, startups who all collaborate and lift each other up in their tech journey.

“Less than 50% of our revenue is coming from coworking”

The rest comes from the other services TAG created:

where they organize bootcamp courses part-time and full-time to support the professional development of their community or even change careers. Classes are around digital marketing, growth hacking and more. Who are the teachers you wonder? Members of the TAG community that get paid to teach. Later on, once students “graduate” from their bootcamp, they usually remain part of the TAG community because they get hired by some of the companies who use the campuses (Coworking spaces being an engine for jobs opportunities? something we strongly believe in at Coworkies, being the first global job board targeted at coworking communities).

The TAG team connects corporate companies to innovators from the TAG community to educate them and help them understand how to innovate.

Any TAG campuses around Europe always host a series of events either for their community but also for the external public.

Having 4 different lines of services allowed TAG to create 4 different business units that create synergies for each other and between each other. And it works. Today, more than 4,500 people use the TAG campuses across Europe as well as 3,800 students every year and more than 110 corporate partners that gravitate around the campuses to learn and innovate better. 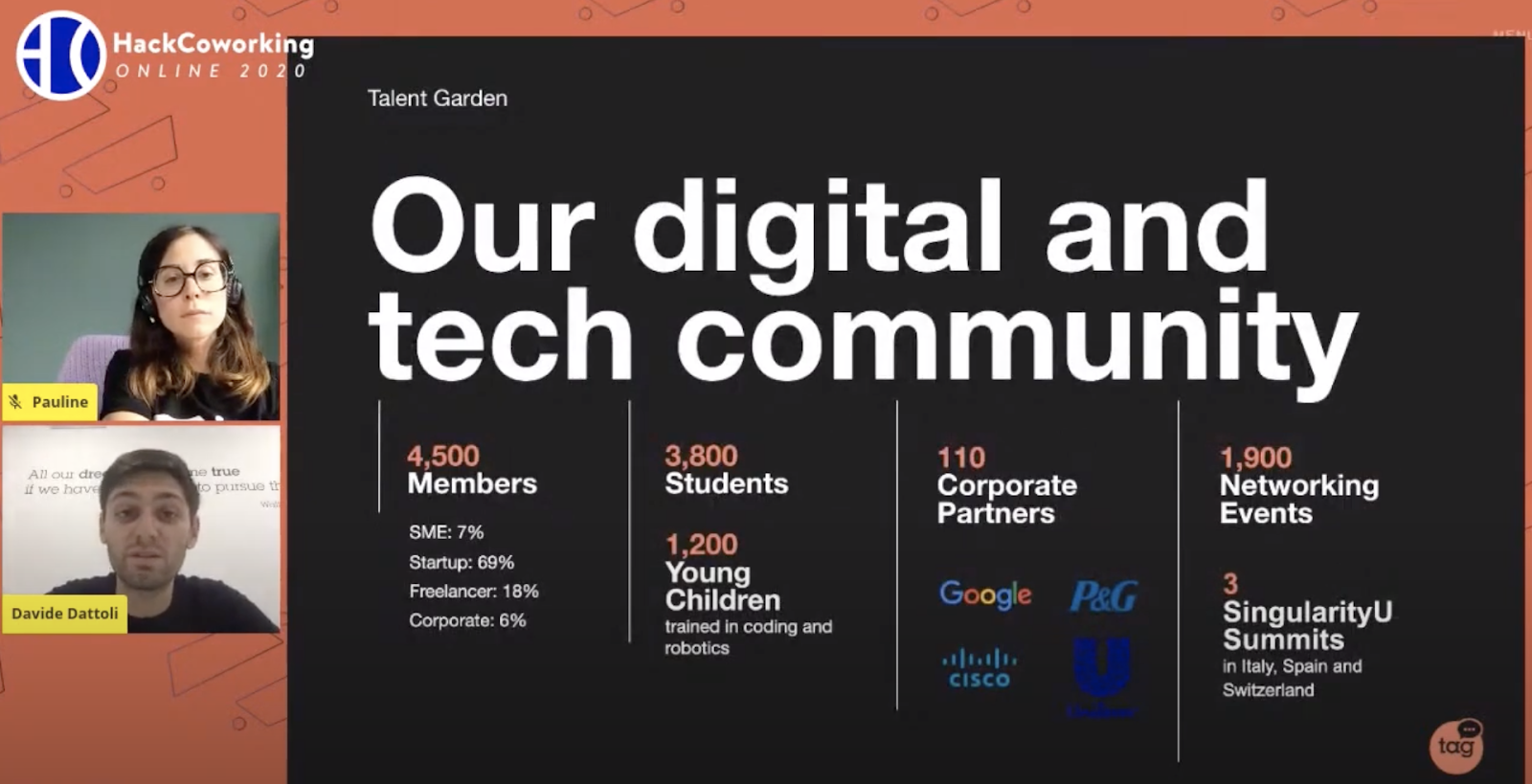 “Since our founding, we’ve raised $57M in financing”

Started in 2011, in Northern Italy, the brand quickly grew locally first. In 2015, TAG expanded outside of Italy and opened its first campus in Barcelona, Spain. Fundraising more than $57M has helped TAG to not only scale but also support innovation throughout Europe. One of the interesting things Davide highlighted in his talk is that right now, their focus is rather on “second-tier” types of areas, which explains why TAG is not yet present in cities like London, Paris or Berlin. 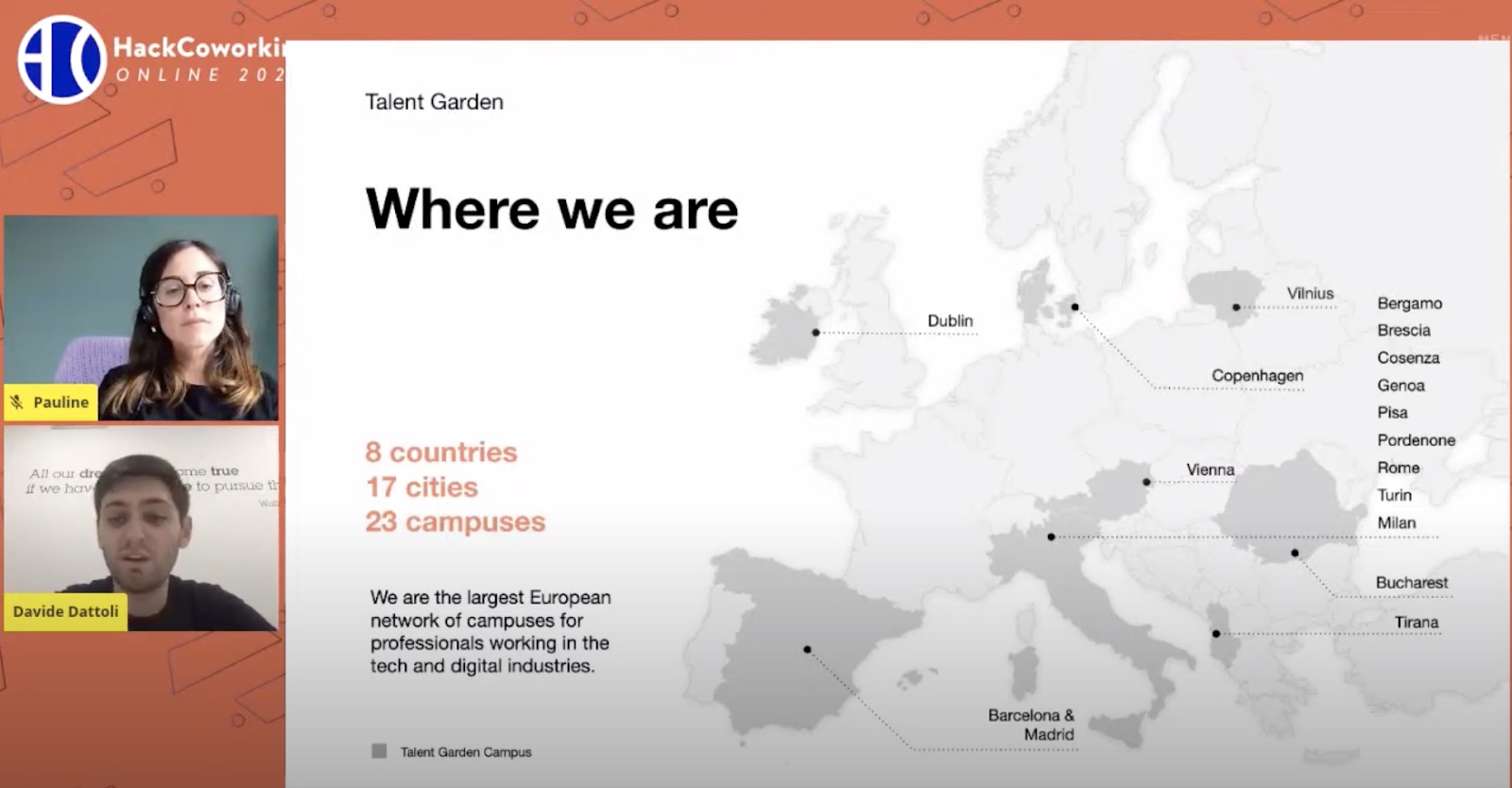 “When COVID-19 came into the picture, being from Italy, we were actually lucky”

As Italy was the first European country impacted by COVID-19 at the end of February, they very early on had to adapt and comply with the directives of the Italian government, which meant that all their spaces throughout the country had to shut down, a few weeks later, when the pandemic started hitting other regions of Europe, like Spain, Austria or Ireland (which shut down early April), TAG was actually already ready to adapt and knew what to do.

The entire TAG team throughout Europe really experienced the outbreak differently as each and every country followed different rules when it came to locking people down.

“But first, our community”

Being community-driven means that the first thing TAG took care of was their members. All the TAG teams locally started calling their members one by one to understand how they were coping with the outbreak and understand what they needed. 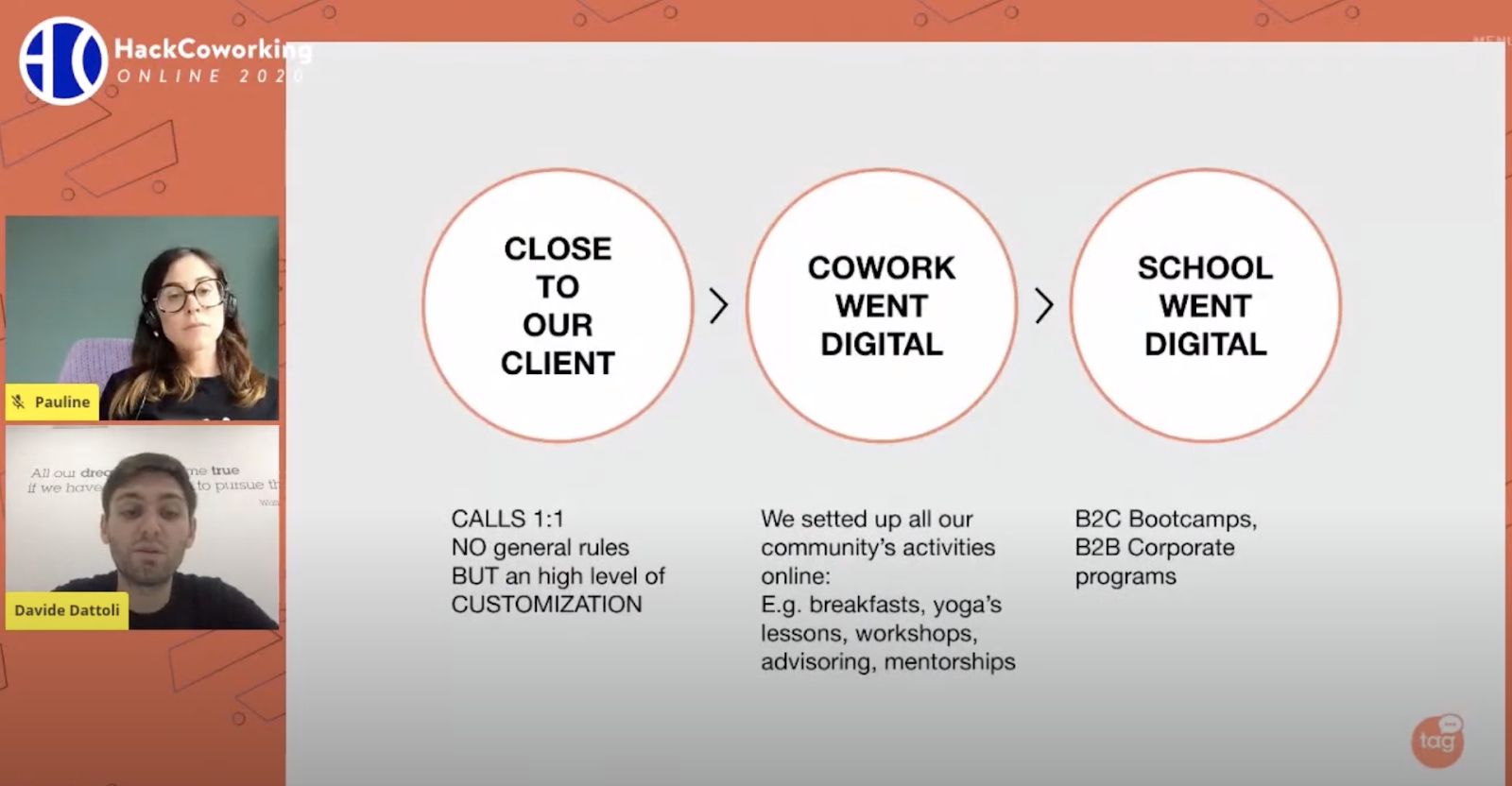 For members who were not that impacted by the pandemic, TAG asked them if they could for instance do advance payments of their rent, to support them but TAG also suspended (or delayed) the rent of members who were hit hard by the crisis. Finding the right balance across their community was essential.

Then, and as most of their spaces were shut down in Europe, TAG had to shift their activities online. Doing so allowed them to keep a close relationship with their members, helping them not just in their work but also keeping a healthy mental state.

Similarly, all the other businesses Davide presented earlier went digital, from their innovation school to their corporate transformation programs.

In order to cope best with the new realities of this pandemic, the TAG team decided to create a new team responsible for cash flow management. “The crisis management team worked in understanding how to avoid cash burn, especially when clients stopped paying”. Putting in place this strategy focused on financials allowed TAG to ensure they could make it through the pandemic while also supporting their community. Below some of the things they did: The second team they created focused on rethinking the long-term strategy of Talent Garden. Understanding that once the pandemic slows down, nothing will return to what it was before, they organized a collective sprint with teammates from campus all across Europe to re-imagine their future. This allowed them to launch new revenue streams like with their digital platform “Smart Working” a platform where members can talk about the new ways of working, allowing larger companies to educate themselves on the topic.

Lastly, TAG focused on safety in the workplace. They invested in different technologies, changing for instance the way their air conditioning works, adding body temperature measurements in their camera systems, or giving everyone badges to limit the number of touchpoints. The TAG team itself did remote work throughout the entire lockdown and reimbursed personal expenses of their employees for personal car or bike usage to avoid taking public transportation once spaces started to re-open. Each and every TAG employee was also able to access perks like wellness apps but also re-arrange their own schedule, especially for parents who also had to take care of their children during the day.

HOW COVID-19 IMPACTED TAG IN NUMBERS

The vision for TAG was to transform their spaces into the “safest places to work”. To do so, they implemented measures alongside the following elements: 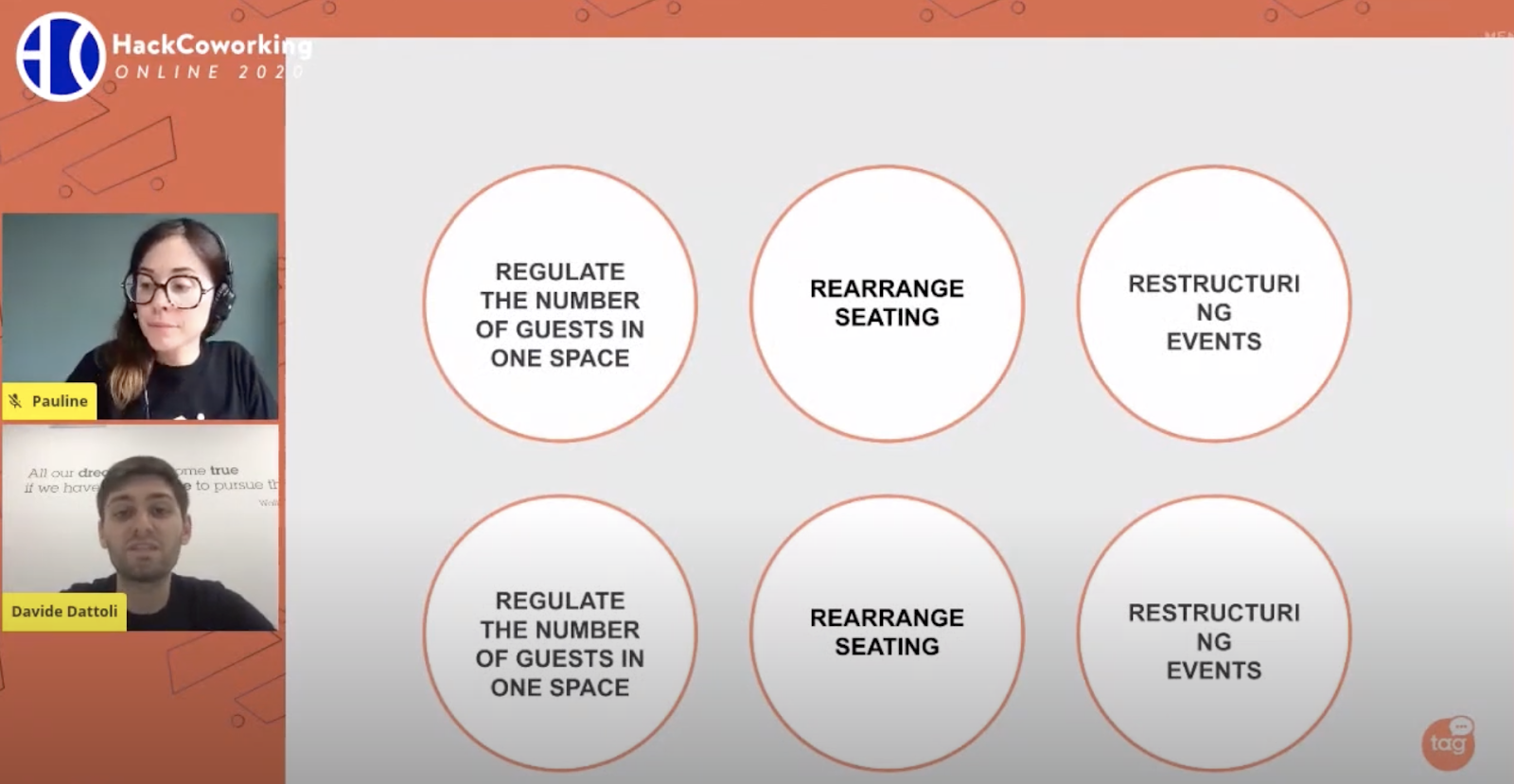 “Our spaces are safer than supermarkets” something the TAG team kept on repeating to their community. And if you think it’s crazy, it’s actually not. As Davide pointed it out, coworking spaces being open work environments, members really questioned their safety.

“What does the future hold for coworking spaces?”

After discussing the way they adapted, Davide moved on to the future. Understanding that the business model behind coworking will adapt, the TAG team is convinced that “flexible spaces will be more valued than ever”. The next 6 to 12 months will be hard for everyone, but with the rise of remote work, more and more companies will look into flexible spaces for their employees and teams. Some of the trends the TAG team started to notice, based on the requests they are receiving now:

Companies are now bringing back their employees in the workplace and understand that large office space is not needed and a shift in their HR policies needs to happen. For instance, by giving employees the possibility to come to their HQ only 1 or 2 days a week and spend the rest of their working time either at home or in a location closer to their home (like a coworking space).

“Members who were coming every day to our campuses are not coming anymore”. For Davide, COVID-19 shifted people’s mindset towards workspaces and he believes that in the near future, members will come to TAG only 2 to 3 days a week. Understanding that, the TAG decided to change their office settings, giving more room for flexible spaces than private offices.

“In the future, people will use our space to meet so we need more meeting rooms, more open space to allow that to happen.”

Understand the new realities around physical distancing, TAG re-arranged their meeting spaces ensuring they comply with the recommended rules. The TAG team also noticed members asking for fewer desks than what they had but also new entering requests from companies with large employee counts (eg. 100) asking for 20 or 30 desks.

As teams and people at TAG are now dealing with new and unknown realities, rethinking the way members approach the space is key. Aside from safety, communication is key. Over communicating with members about the new measures and changes that the brand went through was key to bring them back to the workspace and re-install this feeling of trust. Only 3 to 5% of their members were actually returning to TAG at the time we recorded our talk with Davide, a low figure he attributes to the fear of members being surrounded by people they don’t know.

Davide concluded that because no one knows what the future has in store for us all, it is important to: