Following Ben Tannembaum’s presentation on the impact of COVID-19 on the coworking industry, we made our way to Bangkok, to e-meet Sombat Ngamchalermsak, Co-Founder & Director at Paperspace an architectural company with offices across South-East Asia. The first time we met Sombat was in 2018 in Bangkok at his coworking space and we loved listening to his perspective on how workspaces are constantly mutating and evolving towards new experiences.

During the pandemic, we came across a really interesting study Sombat carried together with his team called “Workplace Adaptation: 2020 and beyond”. Their paper being so full of great insights, we invited Sombat to present them during Hack Coworking Online, offering our audience the opportunity to better understand how workspaces as we know them might transition in the coming months both in terms of interior design and in terms of purpose.

Below the key takeaways of his talk.

Working for large companies in the APAC regions such as Airbnb, Disney, or Microsoft, it is crucial for Sombat and his team to constantly research and educate themselves on the history of workspace. During the pandemic, the PaperSpace team took the time of the lockdown to dive deeper into the past of workplace design, analyzing its evolutions to better understand the shapes the future workspaces might take.

With the rise of technology in the workplace and the invention of skyscrapers in 1895, the office started to take shape, gathering everyone into the same place.

“ In 1900, Mister Taylor started to map how his employees worked in his office”

Trying to replicate what the assembly lines looked like but in an office setup, Mr. Taylor invented what is today called the Taylorist Office, the really early stage of office design.

“In 1937, the workspace becomes more proper”

What was called the open place office gave workers their proper desk with a lot of space. The staff was working on the lower floors whereas the managers were sitting on the upper floors, overlooking them and the work they do.

After World War 2 the economy crashed and the world entered what is called “The Great Depression” era. During that time, it felt like office work stopped. “It took a few decades to recover what we have gone through during the great depression,” said Sombat.

In 1946, the baby boomer era was born, with an increasing emphasis on materialistic things as a way to show wealth. People had to have a car, a house as well as many other accessories to feel happy and fulfilled. Those societal changes translated to the workplace.

In 1960, Burolandschaft was born (or office landscape in English) which looks really similar to what we have today in the office. The staff started to organize themselves as departments, with their own components within their groups, working closely with other departments.

In 1964, Herman Miller created the Action Office, Instead of providing just a desk, they created a system where each individual was given a huge and modular cubicle. The great thing about the action office is that not only people had their own comfortable desk but the space was also adapted to other needs (such as small meetings) placing human beings in the center of their design.

Between 1970 and 1990 the workplace went through big changes

1970 was marked by the 3rd industrial revolution. Computers entered the workplace alongside many other changes in office design, the major one being, in 1980, the rise of cubicle farms. Looking back to the time people were put into factories to work, you realize that they were one key element of it with everything revolving around them. From 1760 to 1980, office design kept on getting better and better for humans working in them. With the cubicle farm, the importance of well-being in the workplace drastically dropped. Employees became a lesser part of Corporations mechanisms and what mattered then was rather cost optimisation.

People were expected to work in their little boxes, looking at their screens from 9 in the morning to 6 in the afternoon. The cubicle era saw the highest number of unhappy and unfulfilled people in the workplace with many feeling sick or depressed to go to work.

In 1990, we entered what is called the modern office. The walls fell down and employees started to work in open space environments. Managers and C-level executives had a bit more privileges with closed offices being given to them for more privacy. “The office suddenly becomes a branding element of corporations” says Sombat, with a strong emphasis on interior design as a mean to represent who you are as a brand and as a company.

The years around the 2000s have been strongly influenced by the boom of major startups such as Google, Facebook or Airbnb when it comes to office design. The workplace became a hybrid thing where you can do more than just work.

Sombat and his team have had the opportunity to work for many years with the Airbnb teams across Asia to design their offices. For the Airbnb office in Beijing, which the Paperspace team designed in 2015, they followed the principles of “activity based office”. The office of 400 sqm welcomes 40 people, with everyone sharing everything, from lockers to desks and meeting rooms. Everyone can choose where they want to work from be it a couch, a standing desk or a regular one.

“Coworking spaces are very much activity based workspaces, except that many companies from various sizes share the same workplace and can choose the way they want to work.”

Sombat also presented the work his team did for Facebook in Manilla. “Facebook believes recreational spaces are very important for their staff and do not see the office as “just a desk””. Break out zones were designed in the office where employees can challenge one another to a ping pong game or just have a nice chat over a cup of coffee.Facebook believing, since its early days that their mission is only 1% completed, they had at heart for it to be reflected in their interiors. Thus all the Facebook offices around the world have some unfinished components that reflect this part of the company’s vision.

Lastly, Sombat presented the work they did in Google Manilla, focused on innovation. “Big ideas that will change the world won’t happen at a desk” thus Google dedicates funds and energy in creating what they call “Collaboration Spaces”. People coming to work at Google are expected to find inspiration in anything, including the way the office is designed, Sombat designed what they called “a digital jungle” - a place where one can work and get inspired.

As Sombat rightfully said it, no one was really prepared or expecting COVID-19 to enter the world. Corporations are now asking themselves “what will happen after this?”. With many employees being forced to work from home during the lockdown and companies realizing that remote work is possible, what will now be the purpose of the office?

Work certainly isn’t the perfect place to work from with too many distractions being available at all time and for some the lack of space to work comfortably. During 4 weeks of the pandemic, the Paperspace team started to really look into the future, using what we know of the past to think about what the new office layout could look like.

“Looking at data, we realized that personal space seemed to be a lot bigger in the past and it just got smaller and smaller up until the outbreak.” 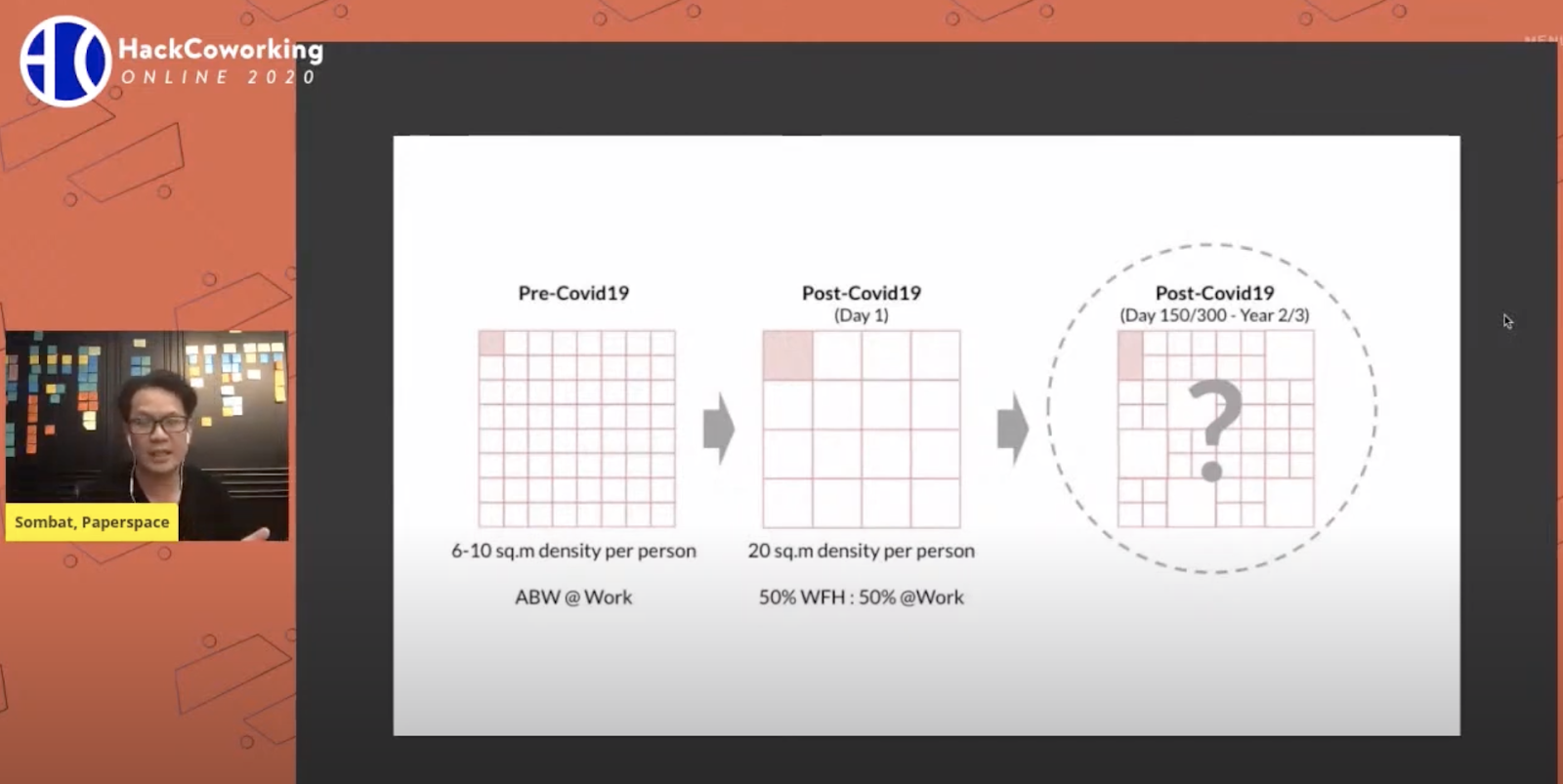 As you can see on the image here, today employees have anywhere from 6 to 10 sqm of space in their workplace.

But because of COVID-19 and the new physical distancing rules that apply, employees need to return to the workplace but in a safe way. What does safe means here? It means that the density will increase from 10 to 20 sqm per person. But because the office is not extendable and companies still have the same number of employees and the same surface, giving additional space to employees means that companies will need to develop new work policies like part of the employees working from the office and the rest working remotely from home or from coworking spaces in their neighborhoods.

“There is no right ratio for that”, says Sombat and everything needs to be looked at case by case, company by company. What is more interesting here is to look at 2021 or even ⅔ years after this. According to the Paperspace team, companies won’t be able to keep offering 20 sqm per employee and will rather balance what was in place in the past and what they developed upon reopening post COVID-19.

How to achieve that? According to Sombat, companies could look at it in 3 phases. 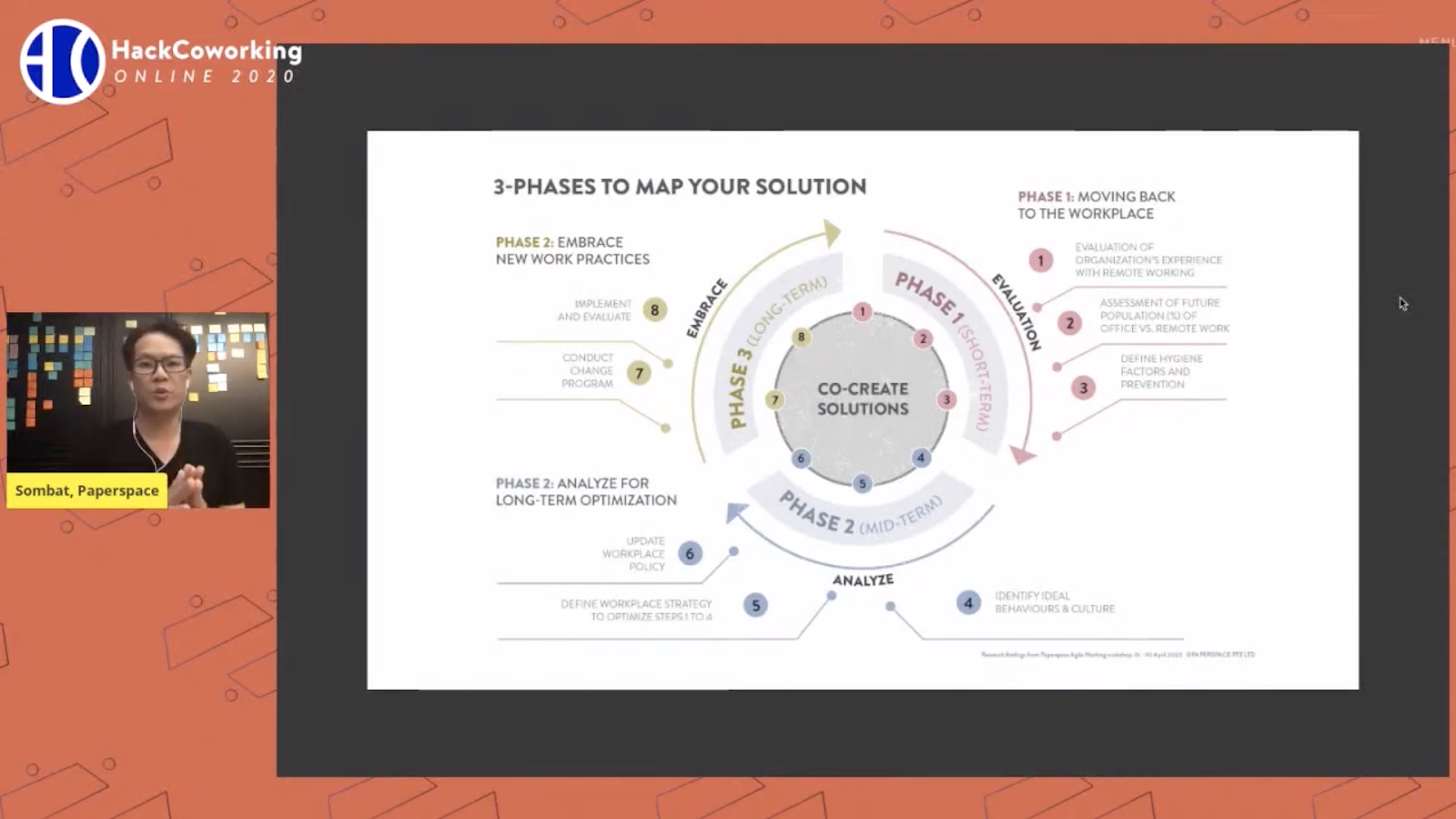 Every crisis has two sides: a positive and a negative one but when it comes to COVID-19, Sombat sees it as a positive thing that pushes companies to re-invent the workplace and make it a thing of its time. The upcoming months might be a lot of trials and errors but in the end, companies and coworking spaces will find the right solutions that work just for them.